The 8th Federal Conference «Critical Communications Russia: Digital Technologies To Ensure Communications and Safety of Government, Society, and Business» was held on Nov.5, 2020 in the Hilton Garden Inn Moscow Krasnoselskaya Hotel. It was one of the rare events this year organized offline, but given the epidemiologic situation, both speakers and listeners were also offered an opportunity to attend the forum online. One way or another, over 200 professionals of the critical communications industry took part in the event.

Gazprom Space Systems was Partner of the forum, and MS-SPETSTELECOM was Innovation Partner. PROTEI was Silver Sponsor, and IskraUralTEL was Bronze Sponsor. Session Sponsors were NORSI-TRANS and OTZVUK. The event was also supported by Micro-Electronics LLC, NIRIT-XINWEI Telecom Technology (NXTT) and Geocybernetic.

A special exhibition area featured solutions from: Micro-Electronics – integrator and exclusive vendor of metering, control and testing systems and RF coaxial and waveguide components for an array of different industries; NORSI-TRANS – one of the leaders of the Russian market of development and deployment of analytics platforms, which has offered state-of-the-art hardware and software solutions for IT security, legal control, network monitoring, analytical systems and business intelligence platforms since 1996; Infotest-R  which in cooperation with Radiocoda presented at the Critical Communications forum subscriber equipment and base station of APEX digital operational radio designed for fully-fledged PMR networks; Astra Linux Group – domestic developer of operating systems based on Linux and virtualization platforms, whose products are included into the register of the Russian Ministry of Digital Development, Communications and Mass Media, and adopted within the standards of government corporations and federal government agencies.

In the breaks between the sessions, online viewers could access live broadcast from the exhibition area.

The plenary session, dedicated to safety of regions and cities, featured presentations from: Yulia Babkina, Head of End Customer relations, Gazprom Space Systems, who spoke about satellite technologies ensuring the security of Russia’s remote regions and shared some practical cases; Alexander Breganov, Deputy Director of PROTEI, dedicated his presentation to integration and analysis platforms for safe cities; Gennadiy Puchkov, senior researcher at the Center for Research Development and Design Support in IT, Research and Development Institute of Special Purposes Equipment under the Russian Ministry of the Interior, looked into challenges, faced by the territorial agencies of the Ministry in relation to the law-enforcement segment of software and hardware complex “Safe City”; Alexey Alexeev, Head of BU Industry Verticals, IskraUralTel, presented practical cases of implementation of regional life safety systems; Alexandra Aronova, Deputy CEO of GLONASS, shared on how ERA-GLONASS can benefit the society, government and business; Artem Kruglikov, Geocybernetic’s Deputy General Director for “Security”, offered the audience an integration case, featuring System 112, the police department of Tyumen region and related municipal systems; Alexey Popov, leading research fellow, All-Russian Scientific Research Institute on Civil Defense and Emergency Situations of the Russian Emergency Ministry, and Deputy CEO, Association «AMEDS», spoke about existing regulatory framework for the development of comprehensive life safety systems. The plenary session concluded with a brief discussion, where the aforementioned speakers were joined by Yury Gorshkov, Chairman of the Board of MS-SPETSTELECOM.

The following session was dedicated to professional mobile radio (PMR) and moderated by Alexey Popov, Deputy General Director of AMEDS Association. The session kicked off with words of welcome from Mladen Vratonjić, Board Chair of Critical Communications Association (TCCA), who addressed the audience by video. He was followed by Alessandro Guido, DMR systems designer at Leonardo and laboratory coordinator of technical working group for DMR Association, whose presentation was entitled: “DMR trunked systems Level III: Standard and practical cases”. Yury Gorshkov, Chairman of the Board of MS-SPETSTELECOM, spoke about broadband LTE services in modern PMR networks. Vladimir Freynkman, Director for Marketing and Systems Research at PROTEI, told the audience about the integration of Critical Communications services into Private LTE networks and how digital PMR is used for public and industrial security. Alexander Averkiev, CTO – Solutions Architect of IskraUralTEL, spoke about industrial applications of wireless systems. Mikhail Kosinov, Director for Strategic Development of NIRIT-XINWEI Telecom Technology, introduced the audience to the only 4G technology in trunked radio systems – MAKVIL, a Russian platform for critical communications. Maxim Velbik, General Director of Micro-Electronics, presented an overview of radio system analyzers for analogue and digital radio stations TETRA, DMR, APCO25 and automated radio testing workstations.

Critical Communications Russia 2020 concluded with a session, dedicated to critical communications and safety systems for mass gathering facilities. The session was sponsored by NORSI-TRANS and OTZVUK. It was kicked off by Pavel Pogrebinskiy, Deputy General Director and Director of IT Department of Russia’s Organizing Committee EURO 2020, who presented an overview of digital technologies, which are meant to ensure safety at the venues of the 2020 European Football Championship. Dmitriy Galushko, General Director of OrderCom, spoke about the current state of the Communications Monitoring System: regulatory provisions and practices in different parts of Russia. Artem Minakov, Head of IT Security at NORSI-TRANS, spoke about imports-independent solutions based on domestic hardware platforms, namely, Yakhont-UVM servers. Both the session and the conference concluded with a presentation from Andrey Ilchenko, Head of Radio Communications Department at the Sheremetyevo International Airport describing comprehensive approaches to the organization of communications for emergency rescue services and airport security.

ComNews Group would like to thank all partners, speakers and listeners, who participated in Critical Communications Russia 2020!

Please note that the next conference Critical Communications Russia is scheduled for the first half of June 2021. The exact dates are to be confirmed. 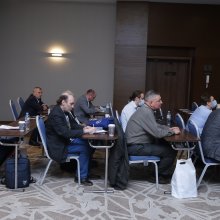 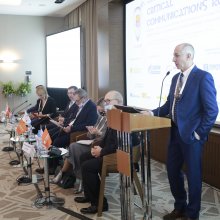 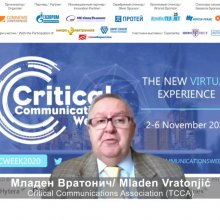 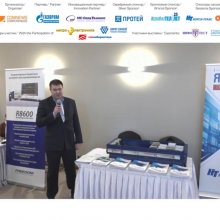