The 8th Federal Forum ‘Smart City & Region: Digital Technology Paving Way To a Smart Country’ was held on Feb. 25, 2021 at the Azimut hotel in St. Petersburg. The hybrid event gathered over 500 participants in total.

The welcome address from the St. Petersburg Committee for IT and Communications highlighted that although technically, they were put on hold by the federal center, Smart City and Smart Region programs were never really interrupted. The financing to back them up was sourced from other programs and projects, especially given that according to Edinstvo’s (Nornickel) Maxim Isaev, the services in question were critical to work and even life during the pandemic. Victoria Voropaeva, Director of Competence Center “Smart City. Digital Region” at Chelyabinsk Radio Plant Polet (Ruselectronics/Rostec), pointed out that despite the pandemic, the interest for Smart City maintained. “What we have actually seen over the past year is more and not less demand for smart solutions. There is so much happening on the municipal level, that makes Smart City an absolute necessity. Yes, Digital Region will live too, and we will feed our data into it, but this data is generated in Smart City, this is the system we are designing”, said Victoria Voropaeva. “The only big issue we faced during the pandemic is identifying the right organizational and financial models that would allow us to raise funds for our projects.”

Deputy CEO of Rusatom Infrastructure Solutions Alexey Golubev emphasized that in terms of public administration, Smart City and Digital Region are two very different systems. Smart City is about municipal authorities defined by the Federal Law FZ-131. Digital Region is about government authorities. Technologically, we can design both projects in the same way, but in terms of legal aspects and repercussions, they are different systems and require a different approach,” explained Alexey Golubev.

According to Head of the Center for IT Development of Perm region Evgeniy Kataev, information technologies have secured a spot among the fundamental needs at the bottom of Maslow’s pyramid. MTS’ Director of Government Programs and Projects Dmitriy Gurtov added that this resulted in an active growth in digital projects and more and more new participants joining such ventures.

Evgeniy Bardebanov, First Deputy Head of the ICT Department of Executive Committee of the City of Kazan, believes that the goal for the future is to switch from electronic to digital services. In this regard, a lot will depend on how soon we will be able to lift the pandemic-related restrictions and whether remote services implemented in 2020 are dropped or maintained. Bardebanov also pointed out that many projects bump into infrastructural deficiencies. Russian Towers’ Director for Marketing and Strategy Timur Shikov admitted that lockdown brought to light a serious infrastructural imbalance between business districts of the city and residential neighbourhoods, which did not have sufficient capacities to meet the demand from new remote workers. This misbalance had to be addressed.

Evgeniy Bardebanov also mentioned that federal financing is a necessity, because not all projects can be self-sustained, especially when it comes to infrastructure. Special Representative of St. Petersburg Governor for Economic Development Anatoliy Kotov commented that other than infrastructure, the government also needs to focus on advanced research enabling the development of comprehensive systems, because private companies are only able to deliver elements of such systems. Although according to ER-Telecom’s Deputy Director for B2G Alexey Palamarchuk, sooner or later, such investments pay off and they enhance the regional economy’s overall competitive ability.

Alexey Palamarchuk also pointed at the regulatory function of the government, which needs to be reduced to setting a general direction for the market without imposing any important decisions. Otherwise, a standard can become an impediment to growth. Chairman of TC 194 Technical Committee of Cyber-Physical Systems, Program Manager at Russian Venture Company Nikita Utkin also emphasized that standards are a tool to avoid digital fragmentation, when systems used in different territories end up being incompatible on the level of protocols and data formats. According to Anatoliy Kotov, the role of standards needs to be similar to the role of languages as enablers of communication between people. There needs to be a single standard.

Experts also discussed ratings and all kinds of indicators. The general conclusion was that they are rather useful. Anatoliy Kotov pointed out that benchmarking is used across all branches of science. It is all about a valid methodology. Evgeniy Kitaev warned the audience against focusing on indicators only. He also mentioned that different government organizations may have different approaches to the same indicators, in addition to possible conflicts of interest, such as when not everything good for drivers would be equally good for pedestrians, and vice versa.

The next session “Smart and the City: From autonomous solutions to comprehensive projects” was dedicated to practical implementation of digital transformation projects and how they change our life. The session was moderated by Sergey Mityagin, Director of the Institute of Design and Urban Studies (ITMO University).

Head of the Department of Science and Innovations of Novosibirsk City Administration Andrey Karasev spoke about the first outcomes of the implementation of Smart City roadmap, which was developed by a joint team of Novosibirsk City Administration and researchers from the Siberian branch of the Russian Academy of Sciences. It features rather trivial things like smart bus stops or solutions aimed to enhance energy efficiency of outdoor and indoor lighting alongside more sophisticated AI based solutions like an interactive voice assistant or even a robot teacher. Two thirds of the financing for this program was sourced from external funds.

Timur Shikov dedicated his presentation to private tower infrastructure in the cities of Russia. The most promising applications for towers are: small base stations that will be used by 5G and optic fiber networks, and all sorts of cameras, sensors and other data collection devices.

MTS’ Head of Digital Model of the Regional Larisa Tatarova looked into successful regional projects related to big data analysis. She emphasized that the complexity and high costs of such projects are widely exaggerated, while their benefits are rather significant.

DataPro’s General Director Alexey Soldatov spoke about the advantages of TIER IV data center. According to Soldatov, his company has a know-how, which enables them to build such data centers for just slightly more than what a TIER III data center can cost.

Maxim Isaev looked into how digital services can be of help for people living in northern regions. Overall, the cities where Nornickel operates face the same problems as other regions, but the North has a lower level of digitalization and digital literacy compared with central regions of Russia. The key priority is to launch municipal portals, which will enable access to digital services and content for the local population. By 2020, 30 of such digital services have already been put in action, and this number will continue growing.

Alexey Palamarchuk shared his vision of the evolution in digital services. It is important to make the service popular with the general public. It has to satisfy people’s real needs, even if not directly. When there is no positive feedback on a new digital service, that means they are met negatively, as we could have seen on the example of social monitoring and analytics.

Andrey Khrulev, Director of Biometric Systems at the Center for Speech Technologies, spoke about implementation of biometric technologies in a Smart City. First and foremost, they are designed to make people’s life more comfortable and safe, by enhancing the efficiency of video surveillance systems and simplifying identification for users of different services. Besides, all sorts of voice assistants proved themselves very helpful during the pandemic and helped to increase efficiency of contact centers.

Business Development Director of TKO-Inform Pavel Chernyshin offered an insight on how digital technologies can help address such a burning issue as garbage collection and recycling.  Digital technologies have proved themselves an efficient tool to improve control and reduce the number of breaches. In this case, the data is sourced from a number of channels – from video surveillance systems to sensors placed on garbage containers and refuse collection vehicles.

The session “Smart City – Safe City: Technologies against the virus” was not only dedicated to the influence of the pandemic on the information technologies, which at this point is a generally accepted fact, but also to how the shocking situation helped to unravel new opportunities for IT and make the new applications irreversible. The session was moderated by Anton Kurash, Editor of ComNews. Andrey Vishnyakov from IT Guild spoke about software systems of the future. At present, the government relies on a bulk of fragmented and loosely connected systems. The municipalities’ job is to ensure new functional ways to lure people into the digital environment. The speaker described two different approaches. The first one is traditional appointment systems, used mainly by the government. As a rule, these are centralized systems focused on formal procedures and regulations, and not so much on people’s needs. Appointment systems are integrated poorly, a common user finds them difficult to navigate. A more modern approach is centered around engagement systems, where users working with different segments of the system receive an experience, and all interactions occur in the single digital space. It means a new type of one-window user experience, and a new level of expectations and collaboration. The company offers a software product, named “Open The City”, which implements a service-oriented approach based on an integrated architecture.

Dmitriy Botov, Digital Products Director of Intersviaz, also emphasized the unifying role of digital technologies. His organization offers users “Smart City” superapp – an eco-system, which integrates numerous services from smart home intercom system to transport card and emergency warning system. The app integrates processes controlled by a number of different government agencies and organizations. A valuable benefit of smart home intercom is that ambulance crews can use it to unlock entrance doors of apartment blocks.

Another speaker – DXDO’s Sales Director Alexander Evdokimov also spoke about data management, but in this case, the integrator relies on IIoT technologies. According to Evdokimov, a smart space is a territory equipped with a variety of sensors connected to a data collection system for processing and analysis of these data. DXDO offers a solution for regional applications, which is integrated with different devices – from video surveillance systems to environmental meters, and supports data collection from different sources, analysis and reporting. 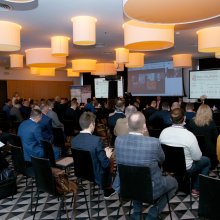 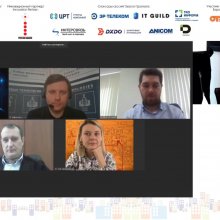 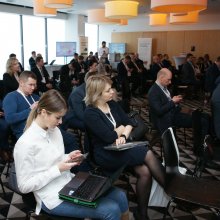