On March 3, 2022, the IX Federal Business Forum “Smart City & Region: Digital Technologies on the Way to the Smart Country”, organized by the ComNews Information Group, took place in the Smart City Pavilion of VDNH in Moscow.

The event was held in the hybrid format and brought together more than 500 participants.

The forum was held with the participation of the Ministry of Construction and Housing and Communal Services of the Russian Federation and with the endorsment of the Department of Information Technologies of the city of Moscow, the Government of Sevastopol, the Administrations of the cities of Kursk and Volgodonsk, the Administration of the Governor of St. Petersburg, the State Inspectorate for Control over the Use of Real Estate in the City of Moscow, the Franco-Russian Chamber of Commerce and Industry, the Innovation Agency of the City of Moscow, the ITMO University (St. Petersburg), and the Smart City Pavilion.

The general partner of the forum was AISA IT-Service, the silver sponsor was Speech Technology Center, the sponsor of registration was Edinstvo company and City Online project for digitalization of the cities of the Far North, the Far East and other cities of Russia. Huawei and IskraUralTEL were the session’s sponsors. The forum was also held with the participation of OTZVUK company.

Plenary session subject was “Updating the Smart City project and actualization of approaches to the introduction of technologies in urban management”.  The session was moderated by Anatoly Kurmanov, Deputy Head of the working group for the implementation of the project of the Russian Ministry of Construction on the urban economy digitalization “Smart City”.

The forum was opened with a welcome speech by Konstantin Mikhailik, Deputy Minister, Ministry of Construction, Housing and Communal Services of the Russian Federation.

The Session 1 dedicated to innovative technologies and solutions for digitalization of urban infrastructure and environmental monitoring was moderated by Anton Kurash, Head of the Vision project, ComNews. Within the framework of the session, the reports were presented by: Alexandra Osipova, Director, Department of Digital Development of the City of Sevastopol, Alexander Vzdykhalkin, Project Manager of the Department for Support of the Digital Technologies Development Projects in the area of Urban Planning, Department of Information Technologies of the City of Moscow, Aleksey Alekseev, Deputy Director General, IskraUralTEL, Roman Sibilkov, Senior Product Manager for Smart Campus, Huawei, Sergey Makarov, Acting Head, Administration of the city of Volgodonsk, Sergey Mityaguin, Director of the Institute of Design and Urban Studies, ITMO University, Head of the International Scientific Division “Smart City of St. Petersburg”, Daria Stepanova, Deputy Head, State Inspectorate for Control over the Use of Real Estate Facilities of the City of Moscow, Ilya Sbitnev, Project Director of the Government Relations Department, Sitronics.

The session on health care and education in the Smart City was also held by Anton Kurash, Head of the Vision project, ComNews. Presentations were made by Alexandra Osipova, Director, Department of Digital Development of the City of Sevastopol, Maxim Kiselyov, Director General, ANO “Human Capital Development” (Department of Entrepreneurship and Innovative Development of the Government of Moscow), Aleksey Dragunov, Director, Pskov Regional Center of Information Technologies, Evgeny Kryukov, Head of the SberMedIA Sales Department, Aleksey Piskunov, Director of the Center for Products and Innovations, Intersvyaz.

The business program of the forum was completed by session 3: “The city as the environment to exchange information and resources. Digital technologies and services to involve citizens in solving problems of urban development”. The moderator was Sergey Mityaguin, Director of the Institute of Design and Urban Studies, ITMO University, Head of the International Scientific Division “Smart City of St. Petersburg”. Presentations were made by: Aleksey Sopov, Deputy Director General, AISA IT-Service, Evgenia Petrachkova, Deputy Director of St. Petersburg State Institution “Center for Information Support”, Committee on Economic Policy and Strategic Planning of St. Petersburg, Roman Astankov, Director General, Otzvuk, Dmitry Grishin, Director of the Lean Smart City Project Office, Rusatom Infrastructure Solutions, Alexey Popov, Leading Researcher at the All-Russian Research Institute for Civil Defense and Emergencies of the Ministry of Emergency Situations of Russia.

At the end of the forum business program, a tour around the Smart City pavilion exposition took place. 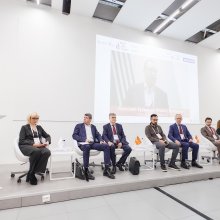 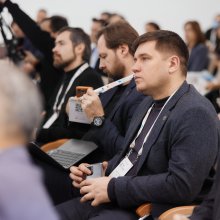 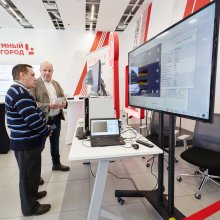 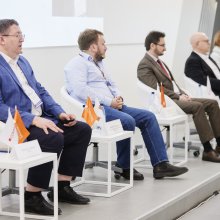