The 2nd Federal Forum “Smart Cars & Roads – digital transformation of the car-road ecosystem in the Russian Federation” held in Moscow on November 29, 2018, continued the tradition established last year to consider the connected vehicle and the intelligent transport infrastructure as a whole.

The forum has got some additional relevance owing to the decree of the government of the Russian Federation No. 1415 “On the experiment with operation of highly automated vehicles on the roads” that was published on the forum’s eve, November 26, 2018. The experiment in question, which is foremost legal, will start on December 1, 2018 and will last until March 1, 2022.

The plenary session of the forum contained a global view of the car-road ecosystem digital transformation in Russia and all over the world. The session’s moderator was Dmitry Markov, Director of Information Infrastructure, ANO “Data Economy”. Comprehensive reports in the plenary session were made by Grigoriy Mikryukov, Head of the Department for Sectors of Economy, Analytical Center for the Government of the Russian Federation; Nikolay Matveev, Deputy Director for Transport Analytics and Planning, MosTransProekt; Alexander Klimov, Head of Electric Vehicles Service of the Innovation Center, KAMAZ; Andrey Neznamov, Head of ANO Robolaw and Senior Associate of Dentons; Andrei Makletsov, Deputy Head of the Claims Settlement Methodology, Russian Association of Motor Insurers (RSA). In the discussion that followed they were joined by Anton Vasiliev, Project Director of LADA Connect, AVTOVAZ, and Yana Arzhanova, Director of Government Relations, Volvo Group Russia.

Many speakers mentioned the decree of the government of the Russian Federation No. 1415 dated November 26, 2018. In particular, Andrey Neznamov from Robolaw and Dentons highlighted the need to broaden this document. He noted that the existing form of the document allows tests only in Moscow and it the Republic of Tatarstan, for which flat terrain and developed road infrastructure are typical. However, in Russia there are other terrain features, and the roads are often dirt, and an experiment that is even successful in Moscow and Tatarstan, does not guarantee the unmanned vehicles applicability in other regions. Besides, Andrey Neznamov noted that the decree No. 1415 does not cover the whole range of unmanned vehicles, including shuttles, steering wheel-free cars, and also vehicles where a person sits on a passenger place and cannot reach control facilities.

In particular, Session 1 presented the options of the promising national satellite group “Express-RV” in high-elliptical orbits that the Russian Satellite Communications Company is preparing to launch in 2022-2023. This satellite group will provide communication throughout the country that is crucial for connected cars: if in large cities 4G/LTE cellular networks are well developed, then on country roads and highways even GSM coverage is not everywhere. As Mikhail Glinka predicts, referring to the calculations of “Nebo” group of companies that is the technological partner of the Russian Satellite Communications Company on “Express-RV” project, in the fifth operation year the users of this satellite group in Russia will be 6 million subscribers with an individual receiving terminal (on cars, in the vast majority) and 300 thousand connected M2M/IoT devices, as well as 166 million passengers of trains and public transport per year.

At the same time, Igor Akulinin from Huawei noted that in 5G networks it will be possible to communicate devices directly with each other, even without network connection. “The car will be able to communicate with other vehicles and road infrastructure without communication network”, he said. Cellular vendors have developed C-V2X (Cellular vehicle-to-everything) technology for connected cars, which will allow them to communicate with other cars, infrastructure and pedestrians (and not necessarily on the 5G network basis, LTE can also be used). However, for the time being the ADAS (Advanced Driver Assistance Systems) technology is more common in the automotive market. “There is a lot of discussion in the world about which way to choose for the car market: ADAS or C-V2X. Huawei believes that these technologies will be used together, and together they will cover 96% of incidents on the road”, Igor Akulinin said.

The theme of Session 2 was smart transport on smart roads in the context of the digital economy, and the session was moderate by Ivan Pekshev, the founder of CarCoin digital platform service. The topic was so extensive that the session consisted of two parts. In the first part of Session 2, the views of the problem were presented by Maxim Lyalin, Sales Manager, Linxdatacenter; Roman Ferster, CEO, RGRAUTO (Official distributor of Mobileye, An Intel Company); Mikhail Korablev, General Designer, GLONASS; Alexander Safonov, Marketing Director, EM Group (Euromobile). The discussion participants in the second part of Session 2 were Igor Kheresh, Business Development Director, T-One Group; Victor Safonov, Head of the Department of Project Management, Tetron; Pavel Bruk, Regional Director of ANSYS SBU in Russia/CIS/Nordic; Yuri Voloshin, Sales Director, All Tow-Trucks in Russia; Evgenia Kravchenko, Marketing, promotion and PR Director, BIPMASHIN (MatreshCar); and Denis Netaliev, CEO, Robot2b.com.

Roman Ferster presented a view opposite to the majority of the participants: that the unmanned vehicle creation is too expensive, so this may not happen at all. He explained that this high cost is related to the need of constantly updated high-precision maps, with backup (because in Switzerland, for example, there are tunnels 25 km long, and throughout this length there is no connection with the satellite), as well as to the development of artificial intelligence (AI) systems capable of driving at the human level. “And the computer with AI in the car will have to communicate with human drivers, because they will not disappear instantly. But all people are different: one goes too cautious, the other too aggressive, and the computer will have to deal with all this”, Roman Ferster said. He also drew the audience’s attention to the fact that society will not accept AI that drives a car as a person. “In the US, 35 thousand people die on the roads every year. If we say that a robot will drive a car like a human, that is kill 35 thousand people a year, the society will never agree with this. And even with tenfold smaller figures (3,500 people per year)”, CEO of RGRAUTO said. In his opinion, the American society will be ready to accept the guilt of robot drivers as 35 deaths a year, but creating and testing such a complex system will require billions of dollars. Based on this ideology, the Mobileye company considers the creation of unmanned vehicles impractical, offering instead a Responsibility-Sensitive Safety (RSS) platform where about 90% of major types of road accidents are registered. “RSS could be the basis of unmanned vehicles certification”, Ferster concluded.

Driving safety can be provided both in unmanned mode and in a car with a driver. Michail Korablev from GLONASS said that since its launch the Russian state system of emergency response to accidents ERA-GLONASS has already saved more than 700 people, and in the future GLONASS plans to save 4-5 thousand people a year (in particular, due to the link-up with ADAS on-board equipment).

Evgeny Dolotenko from Volvo Group Trucks Russia announced that the future has already come: on November 20, 2018, Volvo Trucks signed the first commercial contract for the supply of six autonomous trucks. The customer of Volvo Trucks is the Norwegian company Brønnøy Kalk AS that will operate these unmanned vehicles to transport limestone from a surface mining to the port located five kilometers away. By the end of 2018, Brønnøy Kalk will test the unmanned trucks, and in 2019 it will start their commercial operation.

According to Roman Ferster, unmanned vehicles do not start with trucks where the driver cost is small relative to the cost of the car and cargo, but with taxi where “getting rid” of driver promises great economic benefits. However, Andrei Vavilin of BaseTracK Rus did not agree: “All innovations, whether security or other system, started with trucks: they are the real economy, and the robot pilot in freight transport will result in important benefits”.

In addition to numerous technological issues, to introduce unmanned transport it is necessary to solve many regulatory problems, in particular in the field of insurance. Pavel Fomin from SOGAZ pointed out that the decree of the government of the Russian Federation No. 1415 does not include the issue of insurance for the unmanned vehicles. “But the problem is wider: in order to justify to the Central Bank the validity of payments for accidents with unmanned vehicles, we the insurers need a regulatory framework. And also we have to insure information risks because the robot is based on software, and it can have errors or failures”, Pavel Fomin said.

In 2019, on October 24, the 3rd Federal Forum “Smart Cars & Roads” will continue to consider these and other topical issues that will allow more effective and faster digital transformation of the car-road ecosystem in Russia. 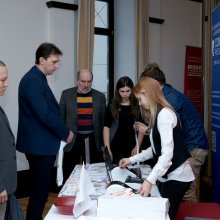 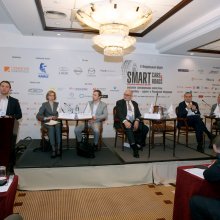 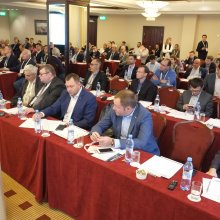 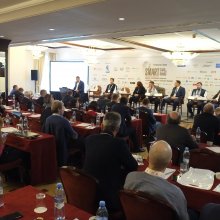