Held for the sixth time, in 2018 the conference subject matters were significantly expanded: beside professional mobile radio (PMR or trunking), the conference also explored such issues as the security of Russia’s critical IT infrastructure, the outlook for “Safe City” hardware and software complex (and System-112 as its fundamental element), development of governor situation centres, implementation of smart video surveillance, and safety and security arrangements at public events (including FIFA World Cup 2018 in Russia) and large-scale organizations (such as, Russian Railways, Sberbank of Russia, Sheremetyevo International Airport, Disaster Medicine Centre of the Russian Health Ministry, or Russian Ministry of Agriculture). The golden thread of Critical Communications Russia 2018 was implementation of new digital technologies in critical communications and digital transformation of the entire industry.

In his keynote address at the Plenary session, Chairman of TCCA Association Mladen Vratonjić looked into a wide number of issues related to PMR. Even though in the past few years critical communications industry has been anticipating LTE to replace TETRA, according to the head of TCCA, we are not quite there yet. “Although TETRA has been around for more than twenty years, it’s still strong,” Vratonjić said at Critical Communications Russia 2018. “The world still hasn’t come up with another technology that would ensure the same level of security, flexibility and reliability when it comes to voice traffic.” TETRA does not ensure data transfer, including video, which security and emergency response services want to send to their dispatch and control centres, but not always is it possible: often a field officer needs to have their hands free and can only communicate with their superiors by voice. Besides, LTE networks require frequency spectrum, which is scarce these days, and LTE equipment is rather expensive.

Integration of functions needed by critical communications industry into commercial LTE equipment (multipoint communication, priority call, push-to-talk, isolated base stations and so on) is going very slow. All of these functions were included into LTE Release 13, which was completed by 3GPP – the standards authority – in March 2016, but commercial equipment based on this specification won’t hit the market until 2019.  This is exactly why, according to Mladen Vratonjić, some countries, such as the Netherlands and Slovenia, have started the construction of TETRA networks, and in Saudi Arabia, following the launch of a dedicated LTE network for critical communications they also rolled out a TETRA network for voice services. The conclusion made by TCCA Chairman is that PMR networks (and most notably, TETRA) won’t go anywhere and will continue co-existing with LTE and in the future – with 5G.

Another speaker of the Plenary session, Deputy Head of the All-Russian Research Institute for Civil Defense and Emergencies of the Russian Ministry of Emergency Situations Sergey Kachanov recalled the words said by Minister of Emergency Situations Vladimir Puchkov at the Saint Petersburg International Economic Forum 2017: “…Today’s economy implies that we focus on a number of key priority areas, but security and stability must be one step ahead of the economy, and not the other way round. We cannot first lay asphalt, and then dig up and insert sewers.” Sergey Kachanov also spoke about integrated life safety and security system implemented in the Russian Federation – one of the priorities of internal policy. The fundamental elements of this system are: disaster control, law enforcement segment, and life environment safety, and on the regional level the key tool of the integrated life safety and security system will be the hardware and software complex Safe City.

Dmitry Novikov, Deputy Head of Communication Networks Development and Support of Central Communication Stations - a subsidiary of Russian Railways, revealed the details of the pilot project with Tele2 and Nokia for real-time video streaming carried out at Luzhskaya station (Leningrad region). Among other, this technology can be used for remote control of locomotives.

A joint report delivered at the Plenary session by CEO of Radio Tel Saint Petersburg Sergey Biryukov and Director of Smolniy ATS Felix Kasatkin, was dedicated to application of TETRA in mission-critical communications for the purposes of Saint Petersburg government and municipal emergency response services. Integrated trunking network from Radio Tel Saint Petersburg covers a territory of more than 2,800 sq. km. and attends over 70 organizations, services and agencies, with 99.9% calls handled successfully. According to the co-speakers, Radio Tel’s TETRA network may become a connecting link between the governor’s hotline, district hotlines, EMERCOM branches, the police and municipal utilities (Lenenergo, Vodokanal Spb, fuel-power complex and housing and communal services), emergency medical services, municipal public transport enterprises, Service-112, municipal distributed control systems, and local dispatcher services. Radio Tel Saint Petersburg is ready to roll out similar systems in other cities of Russia. Beside Saint Petersburg and the Leningrad region, the company already holds licenses for TETRA operations in Moscow and Moscow region, Krasnodar territory, the Republic of Tatarstan, Nizhni Novgorod region, and the Primorye territory.

Critical Communications Russia 2018 concluded with a large session, which looked into innovative digital technologies and services as drivers for evolution of critical communications. The audience of the conference learned about new approaches, solutions and projects from: Andrey Kiyan, Director General of Infotest-R; Andrey Skvortsov, CTO of Tisscom; Pavel Pogrebinsky, Director of IT and Infrastructure Department of the “Russia-2018” Organizing Committee; Dmitry Kurilov, LTE-450 Project Manager at Tele2; Igor Shilkin, Head of the Crisis Management Centre of the All-Russia Disaster Medicine Service, and Igor Tsikorin, senior specialist – telecommunication engineer at International Airport Sheremetyevo.

Traditionally for COMNEWS events, Critical Communications Russia 2018 offered excellent networking opportunities, so that delegates and speakers could find new potential customers and partners.  Thus, the audience showed high interest for domestic critical communications system APEX based on APCO 25 open digital standard, which was presented by IT-Industria company. According to its Marketing Director Vladimir Vasilyev, the development of APEX hardware and software complex for the Russian Ministry of the Interior and internal troops started in 2012, and in 2017 it was admitted for procurement by the Ministry of the Interior. Thus, the Ministry plans to use APEX system for safety purposes at the FIFA World Cup 2018 venues in Saint Petersburg, Kazan and Nizhni Novgorod. Vladimir Vasilyev emphasized that it is the first fully domestic design (down to circuit technology) basic hardware and user equipment. Among those who displayed keen interest to APEX system was Sergey Kireev, Executive Director of Collection Management of Cash Circulation Management Center, Sberbank of Russia. He even speculated that five years from now, Sberbank may fully switch to the new system from Motorola Solutions, whose practices in the Russian market, according to Kireev, are far from excellence.

In 2019, at the 7th Critical Communications Russia scheduled for April 4, 2019, organizers of the conference are going to follow up on the topics which were approached at this year’s forum and consolidate the forum’s positions as a professional platform for networking and discussion between government institutions responsible for complex security and its elements, dedicated experts from large corporations representing a broad array of industries, and suppliers of innovative digital solutions. 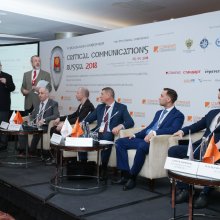 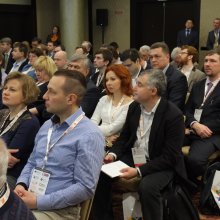 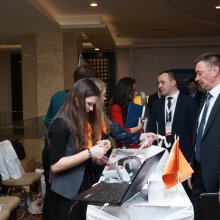