TransNet 2019: Ten Years on the Forefront of Backbone Market

TransNet 2019 was kicked off with the keynote address from Deputy Head of Rossviaz Igor Chursin, who emphasized the importance of the event for the market and suggested that in the future its scope could be expanded to include neural networks. He was followed by Telegeography’s Jonathan Hjembo – Senior Manager for Infrastructure Research, who spoke about the trends in the Russian telecommunications market and paved the way not only to the discussions that followed, but also to the whole forum. At the plenary discussion, dedicated to the evolution of the backbone market and inter-operator cooperation as a key driver of the market, panelists argued whether there is a need to lay new routes for Europe – Asia traffic transit, how sustainable is the business model of operators “joining” routes, and if there are any new opportunities for international cooperation on the backbone market. Panelists included: Olga Makarova, Director of Internet and channel resources Department, Carrier Business Development Unit, Corporate Center, MTS Group, Maksim Akinin, Director International Wholesales, Rostelecom, Konstantin Novikov, Head of National Carrier Sales & Content Provider Services, MegaFon, Sergey Yakovlev, Wholesale Business Director, Company TransTeleCom (TTK) and Boris Khasanov, Solutions Director, Huawei Eurasia Network Marketing & Solutions, Huawei.

According to Executive Director of J’son & Partners Consulting Sergey Shavkunov, the share of Russian operators in the traffic transit market between Europe and Asia has reduced to 16%, compared with 65-70% in 2010. “Out of all the traffic from China and Japan into Europe, in 2015 Russian operators accounted for 53%, then about 40% in 2018, and finally, this figure has gone down to approximately 15-16% today,” said Sergey Shavkunov.

The main share of transit traffic between Asia and Europe is transmitted over submarine fiber optic cables at the bottom of Atlantic and Pacific oceans, and also across the territory of the USA. “Submarine fiber optic system works in favorable temperature conditions: temperature fluctuation in the ocean is just a few degrees over the year, whereas with ground routes across Russia, temperature fluctuation may reach up to 100 degrees,” said Sergey Yakovlev from TTK. Olga Makarova pointed out that undersea cables suffer fewer malfunctions, compared with ground systems.

At the same time, Maxim Akinin drew attention to the popularity of new ground backbone routes, especially, to China via Kazakhstan. He also emphasized that regional consortiums, which a few years ago threatened to provide competition to Russian operators (such as, TASIM), remained on paper, and projects for new fiber optic lines (namely, through Azerbaijan and the Caspian sea) are essentially tactical systems of regional scope, and they do not aspire to become a global transit player.

Head of Rostelecom’s International Carrier Business Vsevolod Korzhaev encouraged development of new business models to succeed in the Europe – Asia transit market. According to him, old approaches are no longer relevant due to high prices for network equipment and the risk that three Chinese operators could switch to cheaper submarine cable routes.

Sergey Yakovlev sees a business opportunity in selling wavelengths (“lambdas”), rather than channels, as it has been on the Europe – Asia route until today.

The first session, moderated by Sergey Shavkunov from J’son & Partners Consulting, was dedicated to new technologies in transport networks. The session was kicked off by Huawei's Simon Lu, General Manager of Transmission & Access Network Product Line, who spoke about Optical Networking 2.0 in the 5G Era. T8’s CEO Vladimir Treschikov spoke about the outlook for the Russian market of backbone DWDM-equipment. General Director of NTT Communications Russia Jun Fujita told about NTT’s business. Andrey Ermurak, Regional Manager Russia & CIS at CenturyLink, looked into the technologies for digital business. NOKIA’s Head of OPTICs consulting engineering department in East Europe Semen Kogan explored the evolution of optical transport solutions under current conditions and its outlook in the upcoming digital economy. General Director of SUPERTEL Konstantin Lukin offered a report on a solution enabling implementation of the program “Digital Economy in the Russian Federation”. Head of Viavi Solutions in Russia and CIS Denis Sladkih entitled his report “Are you ready for 5G?”. Head of Systems Engineering at Ciena Russia & CIS Evgeniy Saveliev spoke about the high-speed future of the networks. Chief Architect of Rostelecom’s corporate center Dmitriy Sakharchuk spoke about thee SDN technologies in backbone networks. The report “Optical communication networks 2.0 in the 5G age – new solutions” was offered by senior expert of Huawei Eurasia Network Marketing & Solutions Timur Kurbanov. He was followed by RSCC’s Head of the Department for Development and Implementation of Infrastructure Projects Igor Khorin, who told the audience about communications architecture for mission-critical national priorities and organization of delivery of 11 temporary duplicates of the 1st federal multiplex across all regions of Russia.

Andrey Ermurak illustrated changes in backbone operator’s business model on the example of CenturyLink. Today, customers tap their networks to cloud-based applications, and this is why the company has launched a service called CenturyLink Cloud Connect, in order to connect big customers to the cloud environment on levels 1, 2 and 3. Another priority is customer data security. “To efficiently mitigate complex attacks, we need high-performance distributed scrubbing centers combined with network technologies to reduce delays and support performance,” commented Andrey Ermurak. CenturyLink has already created 13 scrubbing centers for traffic cleansing and mitigation and tracks about 357 million DNS-queries daily.

According to Vladimir Treschikov, to ensure IT security in Russia, all related equipment has to be domestic-made. He reminded that according to Rostelecom’s “Localization Criteria”, equipment from T8 scored the highest of all participants of the evaluation – 88.5. What T8 does is not substitution, but outrunning imports: in 2018, the company set the world record for data transmission over long distances with 200 Gb/s over 520 km. “Now we can transmit a 200G signal over the same distances as 100G,” concluded Vladimir Treschikov.

Igor Khorin reminded about the role of satellite for the backbone market. By order of the Ministry of Communications, the first television multiplex spanning 11 time zones (in each hour zone) was launched on December 28, 2018, which required implementation of 6 additional duplicates (previously, TV broadcasting in Russia was organized through five temporary zones). To accomplish this task, RSCC used three spacecrafts: Express-АМ, Express-АМ6, and Express-АМ7. The project also counts with Yamal-401 – a satellite of Gazprom Space Systems.

The first day of the forum concluded with a discussion about the role of traffic exchange (IX) on the backbone market, which was moderated by Lead Manager of ivi.ru Maxim Raevskiy. The discussion started with the presentation from MSK-IX’ Commercial Director Evgeniy Morozov: “MSK-IX: Multiservice platform”, and after that panelists discussed new IX-based services as an opportunity to grow their business, the potential of IX as a platform for connecting to Cloud and partners, how traffic exchange services can mitigate declining transit volumes, whether new IX can appear in the Russian regions and whether IX can somehow influence the regulatory policies concerning the Internet in Russia. Panelist included: Kazimir Voytkevich, General Director of Vebra (RED-IX), Egor Drobyshev, CEO of Sea-IX, Pavel Klimov, MegaFon’s Senior Account Manager, co-founder of PITER-IX Nikolay Metlyuk, and Evgene Morozov from MSK-IX.

Kazimir Voytkevich formulated the new role of IX: “IX is no longer a traffic exchange platform, it is a content access point”. Evgene Morozov added that the primary mission of IX is optimization of traffic transit routes. He also emphasized that an important parameter of any IX is its neutrality, and if authors of the “sovereign Runet” initiative end up violating this principle, then there will be no more IX market in Russia.

The second day started with the session “Transport networks development: the ways to deliver content to the end user and improve customer experience”, which was moderated by Grigoriy Mikryukov, Head of the Department for Sectors of Economy, Analytical Center for the Government of the Russian Federation. Brain4Net’s Co-founder and CEO Max Kaminskiy offered a report “SDN for Communication Service Providers: ongoing success and future use cases”. Executive Director of J’son & Partners Consulting Sergey Shavkunov spoke about transport networks in the digital economy era. Tattelecom’s Head of Telecommunication Network Operations and Development Dmitry Frolov offered the audience an insight into the evolution of a multi-service regional operator’s transport network. CTO of ADV Consulting in the North West Stanislav Shatov introduced the audience to the solutions from Ciena. CEO of the Fiber Optics Association Viktor Kuzenev spoke about production of optical fiber as the key pillar of transport infrastructure for the national project “Digital Economy of the Russian Federation”.

The event continued with a discussion about changes in the backbone market in the context of traffic structure shifts and the increasing influence of content providers, which was moderated by CEO of TMT Consulting Konstantin Ankilov. Panelists included: Alexey Byrdin, CEO of the Internet-Video Association, TTK’s Head of Sales Support Alexey Kipchatov, Konstantin Novikov, Head of National Carrier Sales & Content Provider Services, MegaFon, and Yandex’ Alexey Sokolov, Director of Network Infrastructure Development.

Alexey Sokolov decided to analyze the efficiency of telecom operators TV and VoD-projects, launched in the recent years. Alexey Byrdin suggested that the key to success for operators is using third-party content libraries (such as Amediateka or START.ru), rather than developing their own library. “Soon operators will start promoting subscriptions to services like ivi, okko and Megogo, which this far, were not a competition for them,” predicts Byrdin. Konstantin Ankilov added that partner schemes also prove successful in the linear television, using as an example MTS TV service, which is based on SPb TV.

The event ended with a discussion about regulation of operator’s services in the context of their cross-border nature, which brought together Olga Makarova, Director of Internet and channel resources Department, Carrier Business Development Unit, Corporate Center, MTS Group, Mikhail Medrish, Director of Business Development, AMT Group; Alex Semenyaka, External Relations Officer, Technical Advisor, RIPE NCC (Eastern Europe, Central Asia), and Sergey Yakovlev, Wholesale Business Director, Company TransTeleCom (TTK). To kick of the discussion, Madina Kasenova, Head of the Department of Private International Law, Moscow School of Social and Economic Sciences and Head of Legal Expertise at the Institute of Internet Research, spoke about the legal aspects of cross-border services in the Internet. Panelists discussed growing attempts of the government to control the Internet (cross-border clicks and route management), regulatory framework for cross-border services, especially the EU General Data Protection Regulation (GDPR) and its repercussions for operators, similarities and differences between GDPR and the ‘Yarovaya Law’ and their repercussions for Russian operators, outlook for the definition of “national digital border” and specifics of Russian operators’ channel leasing abroad.

Thus, Olga Makarova pointed out that MTS has studied the applicability of GDPR to Russian telecom operators and concluded that when offering roaming services, they process the EU-registered number in anonymized form. Therefore, Russian operators do not have access to the EU citizens’ personal data, so GDPR does not apply to them.

In 2019, TransNet was attended by over 350 participants, who praised the high organizational level of the event, interesting program and excellent networking opportunities. 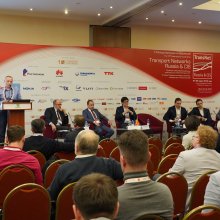 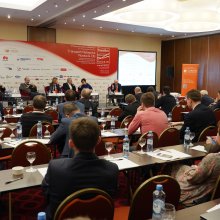 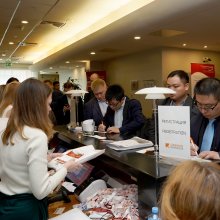 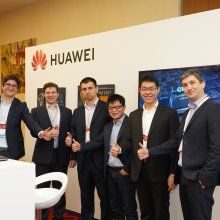