Business Forum “Smart City & Region: Digital Technologies Paving Way to a Smart Country” held on February 21 in Saint Petersburg was a success. The event was the first of a series of business forums, scheduled by ComNews in 2019 across 8 different regions of Russia.

The forum gathered over 200 high-profile experts from legislative and executive authorities of the North-Western district, development institutions, regional and federal operators of wireless and wired communications, IT companies, power distribution and other utilities, vendors of electronic metering equipment and ICT solutions, system integrators, developers of digitals services, and industry media.

The plenary session of the business forum was dedicated to conceptual development and scaling of well-proven models of Smart Country and Smart City. The keynote address at the beginning of the forum was delivered by Deputy Chairman of the Committee for ICT of the Saint Petersburg Government Andrey Nikolskiy.

Founder and director of international consultancy Smart City Insights ApS Peter Bjorn Larsen entitled his presentation “Smart City in Practice: Management and Implementation”. According to him, there are three models of smart cities. The first type is “fashion victims”: they introduce innovations, but don’t have a clue about what they are doing. Secondly, there are “tradition-bound cities”, which do understand exactly which innovations they need and how to implement them, but they don’t have the money. Finally, a truly Smart City is always a combination of understanding of purposes and availability of city funds. “In a smart city, technologies generate value both for the city and business,” emphasized Peter Bjorn Larsen.

Director of Design and Urban Studies Institute of the ITMO University Sergey Mityagin dedicated his presentation to smart cities as a new format for modern-age communities. According to him, surveys show that in the public opinion, “Smart Petersburg” essentially means a green and beautiful city, rather than a safe one for instance. Mityagin believes that the “Smart City” solutions need to be please the public.

Natalia Reen, Technical director of IoT projects at Helsinki’s Innovations Department, told the audience about the “Live Labs” methodology and its role in the Smart City concept, on the example of two of Helsinki’s districts – Kalasatama and Jätkäsaari.

The conversation about Smart City concept continued at the panel discussion “Role of communities and cities in the implementation of the national program “Digital Economy”. Panelists included: Anatoliy Kotov, Peter Bjorn Larsen, Sergey Mityagin, Deputy Director for digital transformation of Smolniy ATS Marina Nechai, member of the Board and Chairman of the Committee for Private-Public Partnerships of OPORA Russia Maxim Ovodkov, Natalia Reen, PJSC MegaFon’s Director for Government Business Development and Special Projects in the North-West Elena Polyakova and Strategy and Marketing Director of Russian Towers Timur Shikov.

Panelists discussed the potential of “Digital Economy” program to ramp up urban and regional infrastructure, first practical effects from Smart City projects, how to assess the efficiency of Smart City projects and in which sectors they can prove the most efficient, specifics and challenges of implementing Smart City projects, new opportunities for public-private partnerships when rolling out Smart City infrastructure, cross-regional cooperation on the path towards a Smart Country, and the most solicited applications of Smart City/Smart Region. Elena Polyakova assured that introduction of Smart City into the national project “Digital Economy of the Russian Federation” and the anticipated release of the related standards by Ministry of Construction will give an impetus to new Smart City technologies. Marina Nechay pointed out that it will not be long now that each region will be able to implement Smart City program, featuring domestic innovations and participation of the SME sector.

At the next session, the audience was introduced to new solutions serving Smart Cities. Investment representative of Kaliningrad region for Saint Petersburg and the Leningrad Region Mikhail Vetrov spoke about “Sovetskiy” technology park in Kaliningrad and its potential. Elena Polyakova, PJSC MegaFon’s Director for Government Business Development and Special Projects in the North-West, reported the first outcomes of the implementation of key Smart City areas in the region. Konstantin Lukin, CEO of SUPERTEL told about the specifics of building telecommunication networks for Smart City projects. Partner at Pepelyaev Group Natalia Kovalenko entitled her presentation “Operator’s access to apartment blocks in 2018 and outlook for 2019”. Dmitriy Vasilenko, senior engineer for Analog Devices at Arrow Electronics, spoke about reliability of data collection networks with critical infrastructure metering devices and examples of SmartMesh IP networks. Project manager at Smart City Development Agency Pavel Zhdanov spoke about raising investments for Smart City, Smart Neighborhood, Smart School, Smart Transport System, Energy Services on the example of cooperation with municipalities and regional government in the Far East and Central Federal Districts. Commercial Director of OS Group Dmitriy Zuev made an overview of components of Smart City solutions developed in Saint Petersburg.

The session continued after lunch, when the audience was introduced to some other Smart City solutions. The report “City Manager 2.0: effective Smart City administration” was delivered by Projects Director at RT Labs Vladimir Grebennikov. Maxim Ovodkov from OPORA Russia emphasized the role of small and medium-sized businesses in the implementation of Smart City projects on the regional level. Olga Smirnova, Chairman of Social Entrepreneurship Commission, Member of the Committee for public-private partnerships at OPORA Russia, told the audience about the organization’s contribution to “Smart Saint Petersburg” project. Jakob Norman-Hansen, Head of Secretariat of Copenhagen Capacity, reported about Copenhagen’s experience with Smart City technologies. The report “NB-IoT and related solutions” was offered by Head of IoT network planning, MTS CJSC, Andrey Plavich. Team lead for geoinformation systems at Rosengineering Alexey Ivanov spoke about possibilities of developing services aimed to engage local communities into municipal administration affairs. Director for Development of the Center of Open Systems and High Technologies Alexander Helvas dedicated his report to the use of neuronetworks for handling mail in government organizations. Dmitriy Pashkovskiy, Project Manager for IT Integration and Monitoring Projects for Municipal Infrastructure, Saint Petersburg Center for Information and Analysis, spoke about a complex approach to sustainable performance and development of energy and engineering complex within “Smart Megapolis”. Alexandra Nenko, senior research fellow and head of the Lab for urban life studies at the ITMO University, presented the findings of a sociological study into the outlook for Internet and mobile services in Kronshtadt.

The event concluded with a round table about new opportunities opened for operators – owners of IT infrastructure – by Smart City and Smart Region projects. Panelists included: Executive Director of the Alternative Communications Operators’ Union Alexey Leontyev, Senior Manager for Sales Support and Project Management at PJSC VimpelCom Petr Andreev, senior research fellow and head of the Lab for city life studies at the ITMO University Alexandra Nenko, Business Development Director of  CompTek Ltd Sergey Portnoy, CIO of Moscow City Telephone Network Alexander Trokhin, and Deputy General Director of Prometheus Ltd. Evgeniy Khomichev. They discussed opportunities to be more than merely a “pipeline” operators can find in Smart City and Smart Region projects, how they can upgrade and expand coverage of their networks to meet the needs of Smart Region/Smart City projects, how they can enter into private-public partnerships for the benefit of regions and cities, whether an operator is capable to offer scalable solutions for Smart City/Smart Region, and how they can monetize data in the cities, and, finally, which third-party data they want/can obtain.

Alexander Trokhin pointed out at the challenges faced by operators willing to take part in the tenders called by municipal authorities: “Such tenders are normally conducted on a “needed-it-yesterday” or “in a month” basis, and winning operator immediately faces fines”. Nevertheless, according to him, Moscow City Telephone Network (MGTS) has adapted to government contracts, and the company’s investment into such projects as connection of video surveillance and traffic lights in Moscow have paid off (the duration of the contracts was 3-4 years). Alexander Trokhin emphasized that MGTS and other two operators, responsible for video surveillance roll-out, feed the video stream to the city, and don’t even have access to it. However, the company would like to have access to such video data, in order to analyze and enrich it, and sell their findings to customers.

Data collection requires IoT equipment. Sergey Portnoy believes it very likely that the government will want the equipment to be domestic made. Therefore, CompTek, which recently became distributor for French IoT vendor Actility, has started negotiations on localization of manufacturing in Russia.

The Saint Petersburg Smart City & Region Forum showed the acute importance of exchanging opinions, approaches and best practices between different regions and cities. ComNews will hold the next event from this series in Kazan on April 23, followed by Vladivostok (May 23), Sochi (June 7), Ekaterinburg (October 31), Sevastopol (November 14) and Novosibirsk (November 28), to finish in Moscow on December 5. 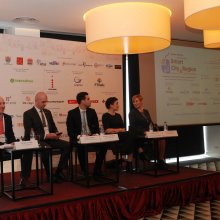 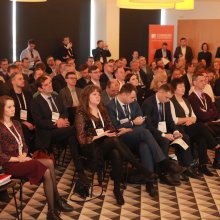 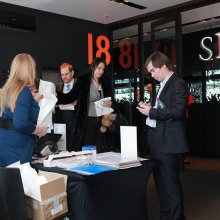 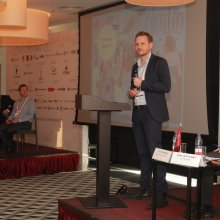