PJSC MegaFon was Strategic Partner of the Smart City & Region in Sochi, while OrionM2M was Session Sponsor. The Forum was also supported by AT Сonsulting Vostok and ICBCom.

The plenary session of the business forum was dedicated to conceptual development and scaling of well-proven models of Smart City. Andrey Bezrukov, President of the Digital Development Foundation, spoke about the tools, which can help to overcome regional digital inequality. Andrey Tambovtsev, Regional Representative for the Agency of Strategic Initiatives, shared insights on the strategy of Smart City Sochi, its key priorities and first outcomes. Anatoliy Golovchenko, Head of IT Unit, the Krasnodar Territory Department of ICT, explored in his report the role, place, tasks and bottlenecks of the region in the implementation of the national program ‘Digital Economy of the Russian Federation’. The Plenary Session also featured a report entitled “Smart City Economy: from intuition to pragmatic calculations”, which was delivered by Chairman of the Commission for Economy, Industrial and Agricultural Sector, Complex Development of Rural Areas, and SME Support of the Civic Chamber of Krasnodar Territory Alexander Polidi. Finally, MegaFon’s Regional Development Director Denis Nikitin spoke about the goals of city digitalization and practical solutions.

The next session showcased solutions, which can be harnessed for Smart City needs. Elena Artemyeva, CEO of Sochi Digital Valley Foundation, spoke about the mechanisms for incubating and scaling best projects and implementation models.

After lunch, the session continued, offering the audience more solutions for Smart City. Director of Legal Initiatives of the Internet Initiatives Development Fund (IIDF) Alexandra Orehovich, spoke about public-private partnerships and new opportunities for cooperation between business and government when it comes to regional digitalization projects. Head of OPORA Russia’s branch in Krasnodar Daniel Bashmakov touched upon the role of SMEs in the implementation of Smart City Projects. Inform-System’s CEO Alexey Ignatyev made an overview of the unified information system “Smart City”.  Deputy Chairman of the Commission for Economy, Industrial and Agricultural Sector, Complex Development of Rural Areas, and SME Support of the Civic Chamber of Krasnodar Territory spoke about the tools to promote investment into infrastructure projects. The session ended with an insight into data security from Robert Bekariya, Chief Architect of Zion.City project.

Smart City & Region forum in Sochi showed the acute importance of exchanging opinions, approaches and best practices between different regions and cities. ComNews will hold the next event from this series in Sevastopol on September 26, followed by Ekaterinburg (October 31), Kazan (November 14) and Novosibirsk (November 28), to finish in Moscow on December 5. 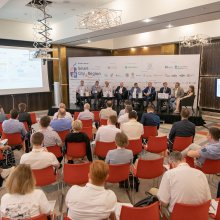 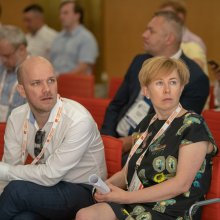 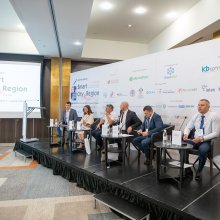 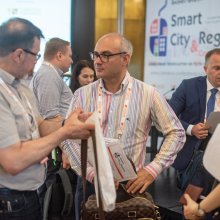