On July 23, ComNews held the 12th International Conference “SATELLITE RUSSIA & CIS 2020 – Spaceсrafts and Satellite Communications on Different Orbits Amid COVID-19, 5G Rollout and Growing Private Initiative in Rocket and Space Engineering”, which had to be held in the online format this year.

The Conference was supported by ESOA – EMEA Satellite Operator’s Association and the traditional partner of our online events – gym chain World Class.

Aarti Holla-Maini spoke about a recent collaboration between the ESOA and Next Generation Mobile Networks (NGMN) in a report entitled: “Synergies between satellite and terrestrial communication technologies”. Yury Urlichich told the audience about the updates in the program “Sfera”, which was announced last year at the Satellite Russia & CIS 2019, about its current status, outlook and opportunities for private-public cooperation opened by this program. Yury Prokhorov presented a report entitled “Development program for RSCC’s orbital constellation. Multi-functional system Express-RV.” Dmitriy Sevastyanov dedicated his time in the spotlight to the current state of Gazprom Space Systems and its prospects. Finally, the plenary session was concluded by Sergey Ratiev, who shared on RTComm’s experience of doing business amidst the COVID-19 pandemic.

The plenary session of Satellite Russia & CIS 2020 culminated with a ceremony, where RTComm.RU was awarded a certificate, attesting that according to Standard magazine and the independent research map ‘VSAT-networks in Russia 2019’, this company was leader of the Russian market of satellite broadband in the number of VSAT stations in 2019.

Award recipient Sergey Ratiev, Director General of RTComm.RU, said: “Our noble and demanding role of the leader among Russia’s satellite operators is centered on providing access to cutting edge satellite solutions to all types of customers: business, government, and private individuals – anyone who critically needs high-speed Internet and other telecommunication services in the most remote parts of our country.”

The plenary session was continued by a discussion entitled “B2B satellite services in the aftermath of COVID-19 - what will be the repercussions of the trend for unmanned technologies and remote work in different sectors of the economy in combination with the economic crisis and reduction of corporate budgets for the market of satellite”, which gathered one of the previous speakers – Sergey Ratiev, Director General of RTComm.RU, Alexey Antonenko, Business Development Director of Orange Business Services Russia and CIS; Igor Tucha, Head of the Development and Telecommunication Systems at SIBUR; and Dmitriy Shelukhin, Chief Expert at the TV and International Sales Department of RSCC.

The plenary discussion concluded with a 30-min debate between Mark Rigolle, CEO of KLEO Connect GmbH and Thomas Choi, Executive Chairman of AirspaceIX Ltd, where the two panelists presented polar opinions on satellites on geostationary and non-geostationary orbits.

The next station was kicked off by several express reports: Mikhail Pykhov, CTO of Gilat Satellite Networks spoke about the VSAT trends during the pandemic; Timur Sarsenov, Senior Sales Manager in Russia and CIS, SES Networks, offered a report entitled: “The advantages of multi-orbit constellations. GEO-MEO-Cloud”. RSCC’s Chief Expert of Communication Systems Development Office Sergey Schepnov spoke about the IoT and 5G, and namely, the convergence of terrestrial and satellite service segments and challenges of creating an eco-system of infrastructure, products and services.  Finally, Andrey Gritsenko, Director General of Information Space Center “Severnaya Korona”, spoke about calculation, simulation and optimization of satellite systems, networks and communication channels, along with the related software and methodological support.

The following discussion was joined by Dmitriy Zakalyukin, Belintersat Project Manager (Belarus); Roman Ermashov, Chief Engineer – Director of Terrestrial Control Facility, Republican Center for Space Communications (Kazakhstan); Nicolas Chuberre, Head of 5G in Thales Alenia Space – France and Standardization in 5G satellite technologies Group in 3GPP; and also Vladimir Terekhov, Head of Airbus Defence and Space in Russia and CEO of Energia SAT. The discussion was dedicated to new technologies in space and on Earth, and how how manufacturers of satellite and terrestrial equipment shall address new challenges (expansion of optical network coverage, increasing number of commercial 5G networks, and growing demand for broad back channels in view of wide-scale switching to work from home).

Session 2 concluded with a debate on different business models for using Ka-band in mass market services:  VNO only vs own services. The debate featured Yulia Babkina, Head of End-Customer Department, Gazprom Space Systems, and Sergey Pekhterev, a shareholder of AltegroSky.

The conference concluded with a debate between Alexey Kaltushkin, Co-founder of Lin Industrial, and Pavel Pushkin, CEO of CosmoCourse. The opponents expressed polar opinions on whether private space initiatives in Russia could be feasible and safe for business.

We would like to thank our partners, speakers and audience members for participating in the online forum SATELLITE RUSSIA & CIS 2020! 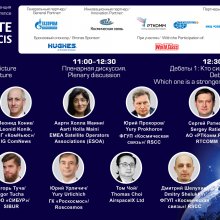 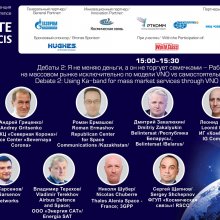 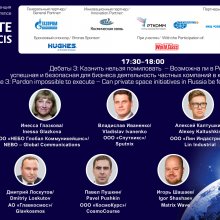 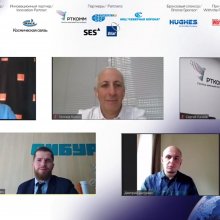