All orbits came together at the Satellite Russia & CIS 2019

Yuriy Urlichich dropped a bombshell with the news about the new structure of the space ICT program ‘Sfera’. According to him, Roscosmos envisages it to include all ‘Express’ (operated by RSCC) and ‘Yamal’ (operated by Gazprom Space Systems) satellites, which will be commissioned beginning 2020, highly elliptical orbit constellation ‘Express-RV’ (RSCC) and earth remote sensing satellites ‘SMOTR’ (Gazprom Space Systems), GLONASS system, ‘Marathon’ satellite IoT/M2M system, satellite broadband system ‘Skif’ and existing space relay system ‘Luch’ and personal satellite communication system ‘Gonets’. Besides, it could also include low orbital constellation ‘Ether’ (if it is able to raise off-budget financing). Spacecraft assembly plant, currently built in Schelkovo by Gazprom Space Systems, is also very likely to be included into the ‘Sfera’ program, as a manufacturer of numerous high-potential satellites.

“’Sfera’ program will be export-oriented,” said Yuriy Urlichich. “The formula for success in the foreign markets is joining forces with the strongest player. We have come to an agreement to join forces with RSCC, which already sells its services in 55 countries of the world, and Gazprom Space Systems. But we are ready to work with anyone open to cooperation.”

When Evgeniy Buydinov from RSCC took the stage, he said: “A comprehensive orbital constellation (geostationary orbit and highly elliptical orbit) will ensure equal access to communication and broadcasting services across all regions of Russia, and will help to address national security and public administration goals. To implement large scale and technologically complex projects, the executive government bodies need to forge mutual cooperation with different enterprises. A federal target program is a tool, which could enable such cooperation. We deem it appropriate to include activities related to development and roll-out of satellite communication systems into the ‘Sfera’ federal target program.”

Timur Sarsenov spoke about his company’s international activities and its plans to launch a new medium-altitude satellite constellation O3b mPOWER. SES intends to put it into orbit in May 2022.

Natalia Ramazanova pointed out that satellite communications market is growing slowly and needs “to be given a push”. One of steps on that front was the Business Development Program, adopted by INTERSPUTNIK. According to Vladimir Glebskiy, the program, which kicked off on April 8, 2019, envisages soft financing for niche satellite projects up to USD 750,000, at the interest rate from 0 to 3%.

The second day of the forum was kicked off with the session dedicated to the new projects in the satellite communications market. Coordinator of the Project "Development of Partner Ties between Russia and UNIDO" Maxim Eliseev told the audience about tender opportunities offered by the UN organizations to Russian companies. Portfolio Manager of Skolkovo Space and Telecommunications Technologies Cluster Ivan Kosenkov spoke about the Skolkovo Foundation’s efforts in promoting private space programs in Russia. Vladislav Ivanenko, CEO of Satellite Innovative Space Technologies (SPUTNIX) entitled his report “Private space initiatives: Russian experience”. Vladimir Bodrov, Project Manager of Joint Small Spacecraft Laboratory of Novosibirsk State University and Fifth Generation DB, told the audience about a CubeSat-compatible platform for extremely small spacecrafts.

The conference ended with a session “Practical implementation of Earth remote sensing and geographic information systems in Russia”. The report “Practical experience with application of Earth remote sensing by Roscosmos State Corporation” was delivered by Roscosmos’ Deputy Director of the Department of Navigation Space Systems (GLONASS) Valeriy Zaichko.  Evgeniy Getz, Director General of the Center for Search Research spoke about the role of earth remote sensing services in the shaping SpaceNet market. CEO of Lotett Vladimir Gershenzon entitled his report “Localization vs Globalization”. Alexander Ruslanov, LANIT’s Chief Engineer, Department of Sector Infrastructure Automated Control Systems, looked into the role and place of geoinformation systems and 3D models in sector infrastructure management of the domestic economic complex.

Valeriy Zaichko announced that Roscosmos is about to complete the Integrated geographically distributed information system (ETRIS) for Earth remote sensing from space: the last (third) regional ETRIS center in the Arctic area will be launched in Anadyr by the end of 2019, the second center was put into operation in the end of 2018 in Dudinka, and the first one operates from Murmansk as a joint effort with Russian Emergency Ministry. Apart from the three regional ETRIS Earth remote sensing centers in the Arctic zone, there are four more regional centers, operated by Roscosmos and located in Kaliningrad, Samara, Zheleznogorsk and Vostochniy. Valeriy Zaichko also mentioned that Roscosmos is currently working on a national control center for Earth remote sensing from space, which will be responsible for the Russian orbital constellation of Earth remote sensing satellites and terrestrial infrastructure. The center will have a geographically distributed structure: the headquarters will be housed at the premises of the Research and Development Institute for Precision Instruments in Moscow, while its remote offices will be located in Deep-space communication center “OKB MEI” (‘Kalyazin’) and the Anino branch office of JSC Russian Space Systems (‘Anino’). The main data processing center will also be located in ‘Kalyazin’.

The next, 12th conference Satellite Russia & CIS will be held in April 2020. 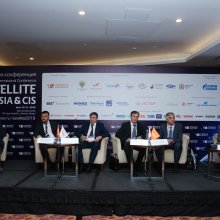 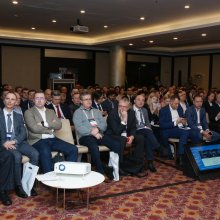 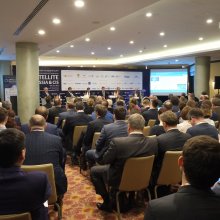 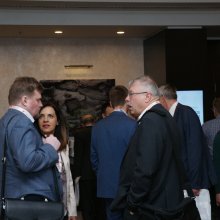