The 9the International Forum “Broadband Russia Forum: Evolution of Broadband Networks in the Age of Digital Economy, Distributed Data Centers and Cloud Services Ahead of 5G” was held in Moscow on Nov. 21, 2019.

TransTeleCom Company (TTK) was Silver Sponsor of the Forum, Russian Towers Group was Infrastructure Partner; ADV Consulting, Ciena, IskraUralTEL and RDP.RU were Session Sponsors, and E-motion was Round Table Sponsor.

The event was also supported by KOMKOR (“AKADO Telecom”), 3data and Tet (Latvia).

Leonid Konik – General Director and Editor-in-Chief of ComNews Group kicked off the panel with an opening speech.

At the plenary panel, representatives of operators and regional and federal government discussed some critical issues around the placement of telecom equipment in the cities. Panelists shed light on the opportunities of using municipal and state corporations’ infrastructure for 5G deployment and related challenges, and agreed that difficulties with access to regional infrastructure is the main barrier to mobile expansion, and there are also problems with placing radio equipment in proximity to privately owned properties.

The representative of the Ministry of Digital Development, Communications and Mass Media urged operators to implement awareness campaigns in the population, so that the placement of equipment doesn’t stir any protests in the local communities.

Another spirited debate was caused by the draft law on non-discriminatory access to apartment blocks for operators.

Session 2 looked into convergence, cloud and novel services, along with the role of satellite broadband in B2B solutions. It was moderated by Andrey Mukhanov, Vice-Rector of the Moscow Technical University of Communications and Computer Science (MTUCI) and featured presentations from Ilya Khala, CEO of 3data; Evgeniy Dyadyura, Head of Development of B2B satellite solutions at VimpelCom; CEO of RDP.RU Sergey Nikulin; Co-founder of E-motion Konstantin Kokush and Head of Cloud Solutions at Mail.ru Ilya Letunov.

The forum concluded with a Round Table, which aimed to discuss the evolution of telecommunication operators into digital service providers. This panel was moderated by Sergey Potapov, Member of Supervisory Board of the ASTRA Association. Panelists included Alexey Kipchatov, Head of Sales Support at TransTeleCom (TTK); Vladimir Karpenko, Director of Strategic Marketing and Business Development at KOMKOR (“AKADO Telecom”); Konstantin Kokush, Co-founder of E-motion; Pavel Zavyalov, DataLine’s Business Development Director, and Vladimir Shaporov, Team Leader, Center of Telecom Solutions.Technoserv Group.

Broadband Russia 2019 demonstrated yet another time the importance of a dialogue between operators and the government and became an important platform for discussion and exchange of opinions on such hot matters as expansion of broadband infrastructure to meet the needs of 5G deployment, growth opportunities for telecommunication service providers, new services and unorthodox strategies to boost ARPU and drive up subscriber base.

ComNews Group has already scheduled the 10th International Broadband Russia Forum for 2020. It will look into the developments in follow-up of this year’s discussions along with exploring new topics and formats. 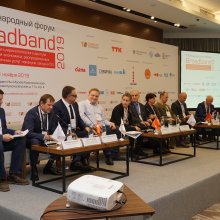 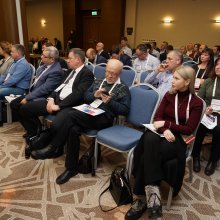 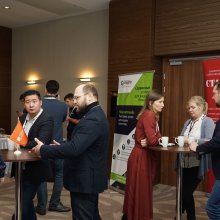 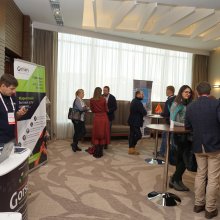